All my life, I have swayed back and forth between various levels of healthy, but it wasn’t until my 30’s that I realized what it truly meant to be healthy and I finally got pretty close. I won’t say I’m perfect, far from it actually. However, I’m waaaay closer than I ever was before.

As a kid, I ate whatever I wanted and didn’t exercise intentionally at all. I played outside a lot and got that type of exercise but I was in no sports and pretty much embraced any chance to get out of P.E. at school that came by. Throughout high school, except my freshman year, I was what someone later told me could be described as”thick.” Now, in my freshman year, I joined the marching band as a flag twirler AND I got really sick over the summer so I lost all sorts of weight. However, when I quit the band my sophomore year, I gained it all back pretty quickly. In college, my friends exercised so I sporadically did too. I also took diet pills of various sorts. I did get pretty skinny but I was far from healthy. I still ate terribly and drank a lot and well, I was in college.

After college, I drank less and exercised more regularly because my fiance was a runner. I didn’t gain weight really until I got pregnant. I gained 50 lbs. It was AWFUL! I ate everything in sight pretty much and didn’t exercise and I was MISERABLE. I lost a little by trying things like slimfast, nutrisystem, etc etc. You name it, I tried it! None of it was long-term though. I got pregnant again and gained it all back. I tried exercising but couldn’t make a dent in the new size that I had become. 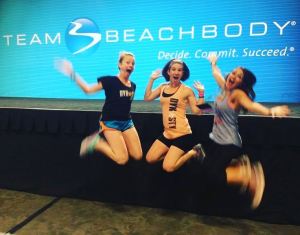 Then came Beachbody. With Beachbody came not just awesome exercise, but also recipes
for healthy food that was actually good. Even more than that though, came support. To be honest, I thought it was going to be LAME. My friend invited me to her “online challenge group” and said we’d all do Beachbody workouts and eat healthy. I was like, “um, ok, sounds dumb but I’m desperate.” Well, when my first challenge group kicked off, I immediately fell in love. I had so much fun, I learned a lot, AND I lost weight. Like a LOT of weight. I dropped 3 pant sizes in 2 months. To this day, this is the best shape I’ve ever been in and have not gained an oz of it back in almost 2 years.